A Welsh Ordinand journeying with Christ in the Teulu Asaph

Jesus said, ‘my kingdom is not of this world’

A joke, to give a slightly philosophical definition, occurs at the juxtaposition of incongruous elements – we laugh when the well-dressed business man slips on the banana or when grown ups behave like children, we laugh at the incongruity of life’s situations. At the heart of Christianity is a meeting of the most incongruous elements, in the centre of our faith there is a sacred joke. God, the one we confess as almighty, becomes a human – divinity and humanity meet, so that we can see in Jesus both God and humanity. As Chesterton goes on, for two thousand years Christians have laughed at this joke – we never tire of it!

Here, at the end of the liturgical cycle of the year, the Church reminds us of Christ the King – the whole cycle of the year builds up to the joke, this punchline of the sacred jest – this man, who lay in the manger too weak to raise his own head, who gives himself every moment seeking out the poor and the lost and healing the sick before pouring out his entire life on the cross in love for a sinful world, forgiving with love even those who crucified him – this man is God, this man is king of the universe. If you asked a child to draw a king the image would, I imagine, be of a man in a golden crown, revered by his subjects, lord of armies in majestic robes… but our King, our glorious, beautiful, holy jest of a King, is a man crucified and abandoned, condemned by society and the religious elite, betrayed by all but his Mother and closest friend. We gaze this morning at Christ on the cross and say ‘there is our king’ – it’s a joke, a juxtaposition of the incongruous, power and weakness held in an absurd relationship.

The earliest depiction of the Cross of Christ is amazing, we believe it’s from a training centre for young gladiators in Rome. It shows a crucified figure with the head of an ass, with a small man kneeling down in prayer – the caption reads: ‘the Christian worships his god.’ Unfortunately, this was probably aimed at some poor young gladiator, but it does capture the

strange incongruity of our religion – a crucified criminal is proclaimed king at the climax of the liturgical year and this is the joke we are all called to share in today.

Think of that amazing reading we heard from Revelation a moment ago: Christ who has made us a kingdom to his Father; Christ worthy of glory and dominion; Christ who will come with the clouds of heaven; Christ the Alpha and the Omega, the Almighty, the all powerful source and summit of all reality. And then think of the Creed we will recite in just a moment’s time, Christ: ‘God from God and light from light’, the one who is in himself God and King. Yet we, as Christians, can keep all that in mind and shift our attention to a landfill site outside Jerusalem in 30AD, because that’s what Golgotha was, and remember the scene – a young man, about 30, nailed to an instrument of torture – in the agony of death he is jeered by soldiers who specialise in brutal executions – almost everyone who paraded with him through Jerusalem two days earlier are gone. Naked, nailed to the tree, mocked and pointed at, laughed at and abused, they jeer at him, ‘he saved others, let him save himself’. We can survey this bloody, brutal scene and say this is the one the Creed is talking about  – he is Lord of Lords and King of Kings, he is the source an end of all reality, God from God and light from light. What a strange religion we share this morning? This is the joke of Christianity! And it is this incongruous juxtaposition which is the drama and the poetry and the beauty and the wonder of the Feast of Christ the King.

But, to declare this Jesus as King is to admit that our notion of kingship is entirely and grievously wrong. What we take to be kingship – authority, power, dominion – have nothing to do with the real thing, we are almost entirely mistaken. The power ISIS believe they wield in the attacks in Paris or in the torture of the people of Syria and Iraq is not true power, it is a sinful facsimile of the power of the Almighty one. In our world, if you have military strength you can subdue and dominate other nations, or personally, if you are wealthy you can protect yourself from the changes and chances of the world; if you have cultural influence, you can save yourself from being forgotten and protect yourself from embarrassment. But the true King does not seek to save himself, he forgets himself for us – he never aggrandises his own ego, he gives it up in love – he empties himself of all visible signs of kingship and godly power in order to empty himself and ‘take the form of a servant’. He, the Alpha and the Omega, the power which creates the entire universe is the power of self-emptying love. This is not what the world tells us – this is not military might or wealth or status. If you want power, proclaims the Christian faith, stop trying to fill up your own life in a self-protective way but reach out and protect someone else – if you want power, if you want to live in the power which created the universe, you need only do the smallest, simplest act of love and forget yourself. 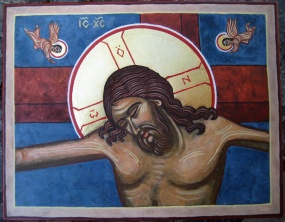 This is a joke to most people. To point at that naked man, jeered at by the authorities and call him king is a joke to the world. But calling Christ King is only a joke in the context of our sinful world – it’s only a joke because we’ve fallen so far away from God’s dreams for us. In terms of the transformed world, in terms of that deeper magic, this is not a joke but the reality of God in his Triune being – everything else in our faith, all the volumes of theology and endless sermons, my entire tripos, is a commentary on this deep reality, this truth of immeasurable significance.

Unfortunately, I’m aware that this might all seem like nice abstractions from an idealistic Welsh ordinand – yes, that’s all very nice and everything, but power does come with money and influence and strength to say otherwise is just to fool yourself. But these are not the pretty musings of an undergrad theologian, love has truly conquered in history and it will conquer again. We’ve seen it – think of Luther King and the Civil Right’s movement, who transformed whole societies, uprooted centuries old institutions and systems through the power of love; think of those families who have been held together despite everything by their love; think of every refugee who has escaped the brutality of their old life to bring their family to the shores of Europe by love, and think of those less glamorous times where love has triumphed, in a trickle of distilled water and the murmured invocation of the Trinity over a neonatal intensive care cot, or in a smear of oil that anoints forehead and hands as life ebbs away.

Love is the dynamite and power of the Church…

Love, my friends, is the dynamite and the power of the Church – the Church’s power is found in self-forgetting, self-sacrificing love, because that is the power of our King. In this Eucharist, as James offers afresh the sacrifice which brought about our salvation, Christ once more pours out his love into the distinctly ordinary elements of bread and wine, the food of the poor in Christ’s time, his body, his soul, his humanity and divinity, his kingly power comes into our midst in the most humble food and drink, yet we are changed by receiving these gifts – love triumphs in us, as it one day will in all the world.

Christ the King – a joke in this sinful world yet, for us who know him, this feast day is the deepest truth in God’s true world of grace and love, that world which breaks out in us and among us and will one day overcome the world.