A Welsh Ordinand journeying with Christ in the Teulu Asaph 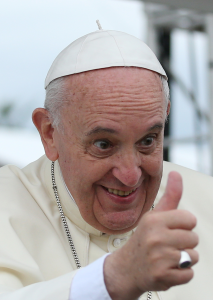 I just wanted to share some thoughts on Pope Francis’ astonishing encyclical, Laudato Si’, published this May. In this remarkable document, the Pope addresses every human being in the hope of beginning a revolution to preserve ‘our common home’ currently under threat from climate-change, a disregard for the poor and the dominance of ‘the market’. In perhaps the most striking sentence of the encyclical, Francis says ‘the Earth, our  home, is beginning to look more and more like an immense pile of filth’. This is increasingly hard to deny and it is for that reason that I believe Laudato Si’ has something to say to every human person, however uncomfortable the message is to receive.

Francis begins with the premise that there is a mutuality inherent in nature – we need nature, he says, and we need each other. The Pope is very clear that our care of nature and of the poor are facets of the same ethical imperative – if we neglect the environment or the most vulnerable we will never live in peace. There is an ‘integral ecology’ which draws us all together and unites our flourishing intimately with the flourishing of other people and of the earth.

The Pope rightly goes on from this premise to attack the false and treacherous appetites of modern capitalism, arguing that the consumerist understanding of human nature is fatal both to the planet and also to the poorest and most vulnerable members of the human race. While acknowledging with gratitude the contribution of technology and innovation, not least in the improvement of living conditions, he issues a stark reminder:  technology gives to those with knowledge and economic resources ‘an impressive dominance over the whole of humanity and the entire world’. This concentration of power is dangerous because the ‘technocratic paradigm’ has come to dominate the economic and political life of our society, skewing it in favour of those with money and knowledge. This concentration of power prevents us from recognising that, by itself, the market cannot guarantee human development or social inclusion. In the existing model we damage not only ourselves, but also our common home.

As well as attacking the excesses of the market, he breaks with the liberal, optimistic consensus of the consuming-world. The capitalist system under which we live will not break the cycle of environmental degradation, no technology can fix the problem of unrestrained appetite which, Francis argues, dominates our culture. The Pope invites us to dramatically ‘change direction’ – criticising the weak response of the majority of liberal-minded people who live in a state of complacency and cheerful recklessness. However, the most scathing criticism the Pope levies is at the so-called ‘ecological debt’ which we are accruing – in our world the poor pay for the greed of the rich, and future generations will pay for our indulgences now. Francis argues that there are inalienable rights and that these are non-negotiable, while at the moment these human needs are ignored so that the few can attempt to satisfy their insatiable appetites.

Whether you agree or disagree with Pope Francis, and people have ardently done both, we can’t ignore his message. The way the consuming-world, that is us, lives is destroying the environment and degrading the lives of millions of people, not to mention the threats to the rest of nature and biodiversity. Francis is characteristically critical of the ineffective global response to this apocalyptic-crisis, highlighting the many statements which have led to very little action. Pope Francis also calls individuals to reconsider their part in these systems which exist to satisfy our need to consume and to find a means of peace and fulfilment which does not exploit the world’s poorest and damage the ‘common home’ on which we all dependent. Of course, all this has an undeniable spiritual dimension for the Pope; the world is not, for him, the result of a random chain of events but the beloved creation of a loving Creator, who has bestowed on creation a dignity which ought not be violated. The Holy Father’s final cry is simple: we must abandon the self-centredness consumerism which has led us here, in order to stop the degradation of our fellow human and the whole created world.